The powerful sorceress and the letting go brew

✨What happened when the elf princess Arianwen and the two ravens arrived to the Wind Witch East of East and West of West?

After a long journey they finally reached the end destination of the map: a lonely house on a mountain top. When they flew closer they saw the witch outside.

Yes, there she was. And the Wind Witch was a magnificent sight – dressed completely in white and her lace dress flowing around her. Dark eyes, and silver lips. Her shoulders was covered in tattoos of black roses, and her long, white hair stood right up as she peered at the two newcomers.

– Oh la la, here you are! I began to think that you two never would show up!

– We was a little delayed – but eh, who said we where coming? said Arianwen.

– I’m the Wind Witch. The wind whispers to me.

– Oh, said Arianwen, and didn’t know really what else to say.

The Wind Witch snapped with her fingers and suddenly a white glimmering blanket lay on the cliff. The witch white cat jumped up on it and purred loudly. It was particularly fond of this cozy rug.

– Have a seat, make yourselves comfortable, said the Wind Witch and held out her hands.

Arianwen and the two ravens sat down on the blanket.

– Alright, tell me all your problems. Or mutter them, if that pleases you more. Or yell! Or go to hell! Ha ha ha, the sorceress laughed, quite hysterically. Now, alright, tell me. What is the matter? She stared right at Arianwen.

– Well, I … I wonder what this tarot card means? It’s a message about a guy. Arianwen held up the death skull for the sorceress to see.

– Hmmmm … let me see … the Wind Witch took the tarot card in her hand, and closed her eyes. While breathing deeply she called upon the Wind, which now circled around her.

– It’s time that you get over him already, that’s what it means, said the witch decidedly.

– Oh, I want to, heh, I do. Actually the question I asked when I drew the card was, when will that happen? When will I forget him?

– Well, my dear, the card says that you really should have let go of him a long, long time ago. But anyway since you’re here, I’ll help you with it!

– Oh, thank you, that would be awesome! said Arianwen.

The witch conjured her large kettle out of thin air and with the help of the wind she started to collect ingredients from her outdoor pantry for a magic letting go witch brew. Oregano, white pepper, an eyelash of a dragon, a bone from a skeleton (that was unhappily in love all his life), two pink rose petals, an old loveletter from a poet, soya (only for the taste) and a piece of black coal all went into the pot.

The two ravens circled around the cauldron, excited to be so close to witch magic – it always made them feel so alive and it was quite a while since they met with such a powerful sorceress as the Wind Witch.

The witch now conjured a crystal glass and by a movement with her hand she asked the wind to fill it. A moment later it held glimmering brew.

– Drink! she said to Arianwen. All of it! 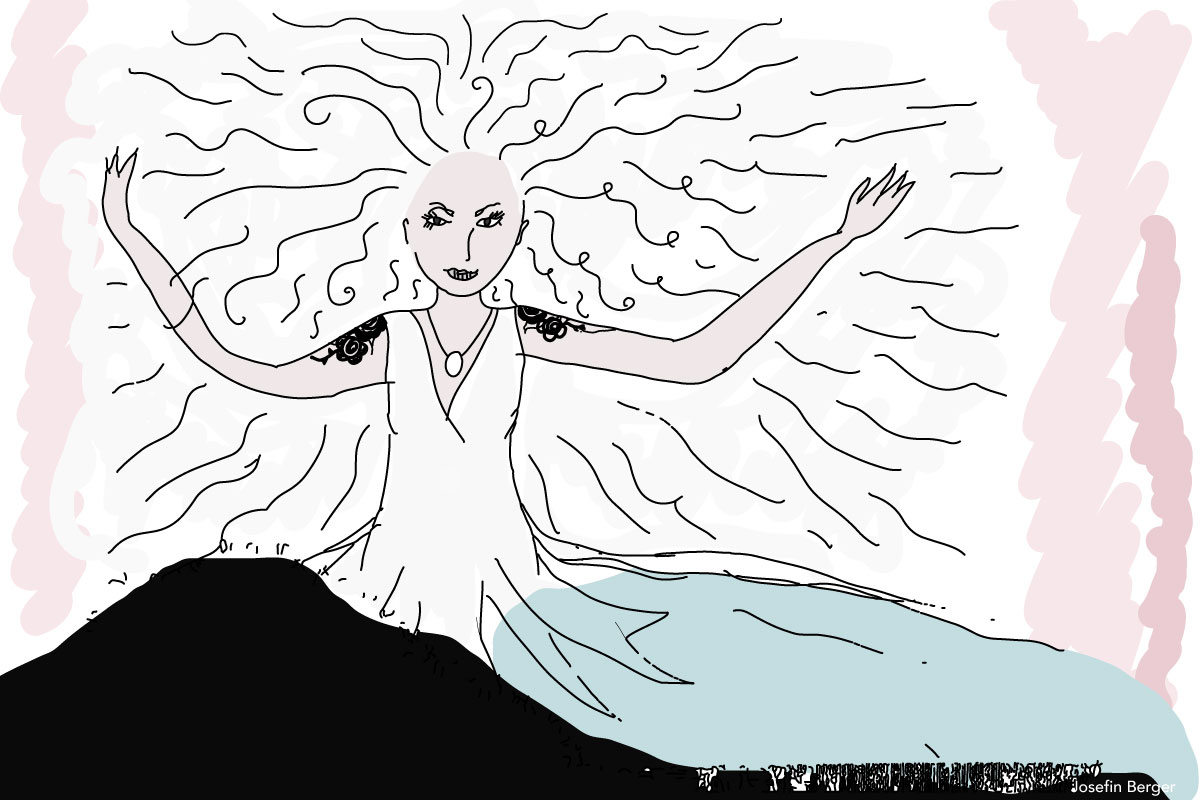 The elf princess took the crystal glass to her mouth. The Wind witch stretched out her arms and yelled, with her hair standing right up:

The wind took hold of Arianwen and pulled her up in the air while the Wind Witch cried out the last words of the spell:

A lightning struck at a mountain close to them and with a clash the elf princess fell down on the earth again. The two ravens still swirled around happily in the air – there where few things they loved as much as magic spells in action!

Arianwen sat on the ground with closed eyes. Everything around her disappeared. For a long time the only thing she saw for her inner vision was darkness, black as night. After a while there was also a cat singing a love song under the moon, and a heart, in red. She opened her eyes and looked directly into the eyes of the Wind Witch white cat that curiously stared at her.

– Who is that elf you’re so fond of, and what has cats to do with it? asked the cat.

– Eh, he’s allergic to cats. But his name is a secret, she added quickly and blushed.

– Allergic! Ha! I’m allergic to elves, said the white cat and jumped up in the arms of the sourceress.

– But I don’t understand, I thought I would forget him? said Arianwen.

– For some reason he’s still on your mind, said the witch and shrugged.

– I have no idea, declared the witch.

Apart from breaking bonds, love was not really the Wind Witch cup of tea. She drank coffee once a year with a wizard friend, and that’s the closest to a relationship that she ever wanted to be.

– He always brings his black panter, even though it eats all of our cookies, ha ha! However it’s a splendid, beautiful creature, so I say it’s alright! said the witch out loud.

– What, no, he don’t, said Arianwen and looked quite puzzled.

– I’m not talking about your elf, I’m talking about my wizard friend! said the Wind Witch as if it were completely self-evident who she was referring to.

The witch had spent so much time alone and gotten used to talk with herself that conversations with real creatures sometimes was difficult. (The cat however, right now purring loudly was a splendid mind reader and followed both the witch thoughts and words with ease.)

– Eh, okay, said the elf princess, still confused. But what should I do? Is there another forget spell or something else? Please, can you help me?

– Pay attention to the red flags! He’s allergic to cats! said the cat and jumped away from the sourceress and climbed up a tree.

Can the Wind Witch help elf princess Arianwen with her request? Well, wait, and see.

—> To be continued! Next episode comes … when I’ve written it! 🙂

Below my new single My True Love Is The Darkness and Your Adventure. You find them on Spotify and most other places where you download or stream music.

✨I hope you’re having beautiful days and
May The Fairies Be With You! <3