✨What remedy did the moon have for Arianwen? A spell, a ceremony or a prayer for finding true love?

Arianwen sat in her tree house with a deck of her favorite tarot cards and her big blue healing crystal, feeling quite prepared for different magic love rituals that the moon might suggest. 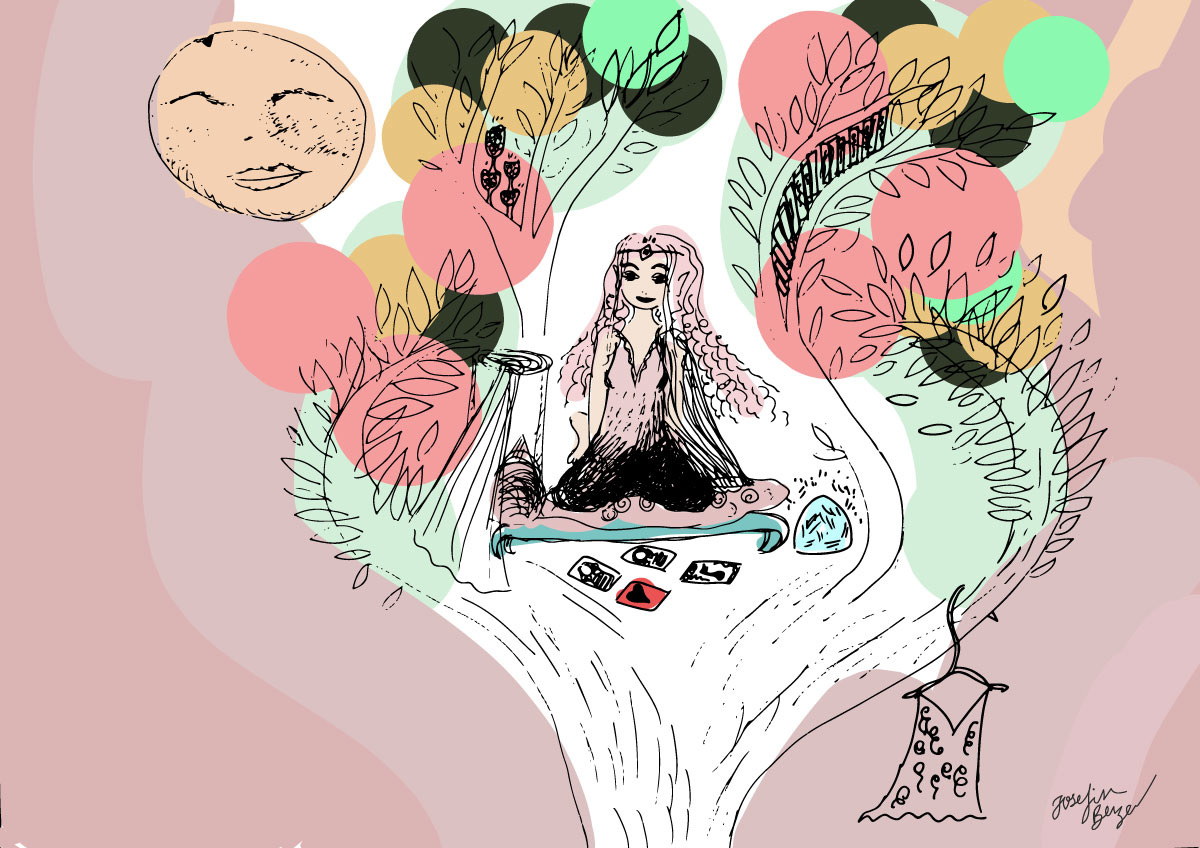 – You are so very lucky, I have the perfect love remedy for you – Elrilmar!

– Elrilmar? What ritual is that?

– My dear, Elrilmar! Your elf friend! He’s also very into drawing flowers and fairies, talking to animals – just as you my dear – and I happen to know that he likes you. Well, what can I say, you two will be a perfect match! said the moon and smiled.

– Oh… Elrilmar! Eh, well, he seems like a good fella from what I’ve learned about him so far … said Arianwen and interrupted herself.

The tree house where humming a little as a smell of mushroom pizza rose. See, in the hut there was a self-baking oven that cooked the most yummy dishes ever imagined!

Cooking had never been a strength of Arianwen, she found it tremendously dull to chop onions and stir around in pots and everything else you do in a kitchen, so she got the magic oven as a gift from her mother Elrónia that was afraid that Arianwen was starving.

Arianwen loved her self-baking oven – it made her mushroom pizza whenever she wanted. Some days Arianwen ate it for breakfast, dinner and night snack.

The oven walked up to Arianwen – see, it was also a self-walking oven – and waited for her to take her freshly baked pizza. Arianwen took the plate and eagerly grabbed a pizza slice.

– But moon, continued the elf princess between the bites, I’m not interested in him.

– What? Why on all earths don’t you like him?

– Well, for a start, I feel no attraction for Elrilmar, said Arianwen and chewed greedy on her pizza slice.

– Attraction! Ha! This attraction thing with you elf people, I just don’t get it. It seems very overrated, said the moon (a little more harshly than she had intended).

The tree house that of course had heard everything shook it’s branches and Arianwen’s self-baking-oven accidentally put on all it’s hotplates, quite chocked by what the moon seemed to be suggesting. A black raven flew up in the tree crown and was now listening, intrigued by the conversation.

– Please, moon, to feel attraction is not something you choose.

– If an elf is kind, looks good, and has similar interests – like our Elrilmar – love and attraction will grow over time, said the moon.

– Moon, I don’t want Elrilmar, and no, that’s not true! Not for me anyway. It has happened to me that feelings of love and attraction grew for a male friend when there was no chemistry for a start, but it’s very rare – and most of the times that doesn’t happen.

– This is a problem, you should be able to choose your lover, based purely on logic and compatibility, replied the moon.

– Ooh, ha, ha, that would be nice. You have no idea how many times I’d wanted to control who I felt attraction towards, fall in love with – or most especially fall out of love with. Would have saved me a lot of heartache, sighed Arianwen, and gazed over The Deep Forest with all it’s mysteries.

She lost herself in her thoughts for a while. At this hour all the trees in the forest where humming silently, singing in harmony with the wind that rattled through the leaves.

– When I think about it, I actually know a witch that might be able to help you with this problem of wanting to choose who to want, said the moon.

– You do? said the elf princess.

– Yes, her name is Wind and she lives in the mountains in a big blue flower.  You go east of east and west of west. Then you walk until you see a very old tree, you climb up a hill, go down a slope, pass a huge anthill and wish for the best. You’ll need to walk three days to get to her, or get a ride from some ravens or a dragon, if you find one. I can draw you a map.

– Wow, that sounds just awesome! … But well, about Elrilmar, I don’t want to want him. Just to be clear about that.

– Well, you can marry him if you want! yelled the self-baking, now quite upset oven to the moon, while the hot chocolate he was making almost bubbled over the pot.

– Moons don’t marry, you know that, responded the moon grumpy to the self-baking oven.

– I’ve heard that in some solar systems the moon marry the sun, croaked the black raven that had been listening for a long time now.

– It never works out cause the suns are up all day and then the moons get out and about in the night, countered a wild rabbit that no one had noticed until it spoke. (He was a very early riser compared to it’s family.)

– Thank you my friends, no sun for me. But about Elrilmar …I still just think that you two would be a great match, that’s all I’m saying, persisted the moon.

– He’s nice an all but there are things that I want – and now I’m speaking behavior, not attraction – that he just doesn’t possess. If I’m gonna choose a lover solely by logic he’s still not my guy. Do you understand? said Arianwen.

– She’d rather live alone for the rest of her life than marry Elrilmar, croaked the raven loud and clear.

– My apologies. No Elrilmar, said the moon, but couldn’t hide her disappointment.

Silently the moon thought that maybe she should send Arianwen to another witch than Wind. There was a big probability that Wind could make Arianwen choose whom to be attracted to and also fall in love with. But if Arianwen chose by herself, it was clear that would not be Elrilmar. What a waste of a perfect match!

– It’s almost dawn my elf princess. I’ll draw you a map and send it with a crow to your night table. I wish you good luck, and we’ll talk again when you’re back from this adventure.

– May you dream of wander and magic, dragons and silver, said Arianwen.

– May your day be filled with laughter and love, answered the moon.

—> To be continued! Next episode comes in November.

Below my new single I Wish! Welcome to have a listen. 🙂 You find it on Spotify and most other places where you download or stream music.

✨I wish you a beautiful July and
May The Fairies Be With You! <3