✨What will really happen if the Wind witch practices her magic with bravura? Will Arianwen forget him, her unrequited love, completely?

Arianwen woke up in the early dawn by a cry from the raven (the one that had been listening in on yesterdays conversation).

– Oh, good morning to you too, raven … or something like that, said Arianwen and looked around.

– Your old self will be no more! Croaked the raven and flew higher up in the tree crown, with the map from the moon in her beak.

– Oh right, you meant it like that. Well, I sure hope so. I really look forward to choose for myself whom my heart and body wants.

During the night the self-baking oven had prepared provisions for the trip. Neatly packed was a good amount of bread and spread, sparkling water with lemon, rich coffee, hot oat chocolate and several elven meals – and of course most of those where mushroom pizzas.

The self-baking oven had also packed a brown bag with parts of an animal cadaver from the forest, which would be plenty of food for the two ravens that would accompany the elf princess.

And to strengthen Arianwen for her journey to come, the self-baking oven today had made Arianwen an extra hearty breakfast: a very large cup of hot chocolate, and two large sandwiches with silver salad and delicious oat cheese. The oven walked up to Arianwen with the breakfast on it, to let her start her meal.

While the elf princess started to eat, the black raven came flying with Arianwen’s favorite tarot deck with it.

– Can I draw you a card for the journey? said the raven.

– Okay, that could be fun, said Arianwen and smiled. No raven had drawn tarot cards for her before.

– Alright, what do you want to ask?

– Hm… this: when will I stop to think about my latest love object? It’s a hopeless story, as usual when I fall for someone; he don’t like me back, or at least not enough. So, I really want him out of my head as fast as possible. When will it happen? With the witch’s help I guess soon, hopefully, but could be fun to know when.

The raven closed it’s eyes for a second, and then picked up a card from the deck. Turned the card around. Arianwen and the raven looked at the card. And there it was: a death skull staring back at them. Below it was two crossed bones, as in a pirate flag. 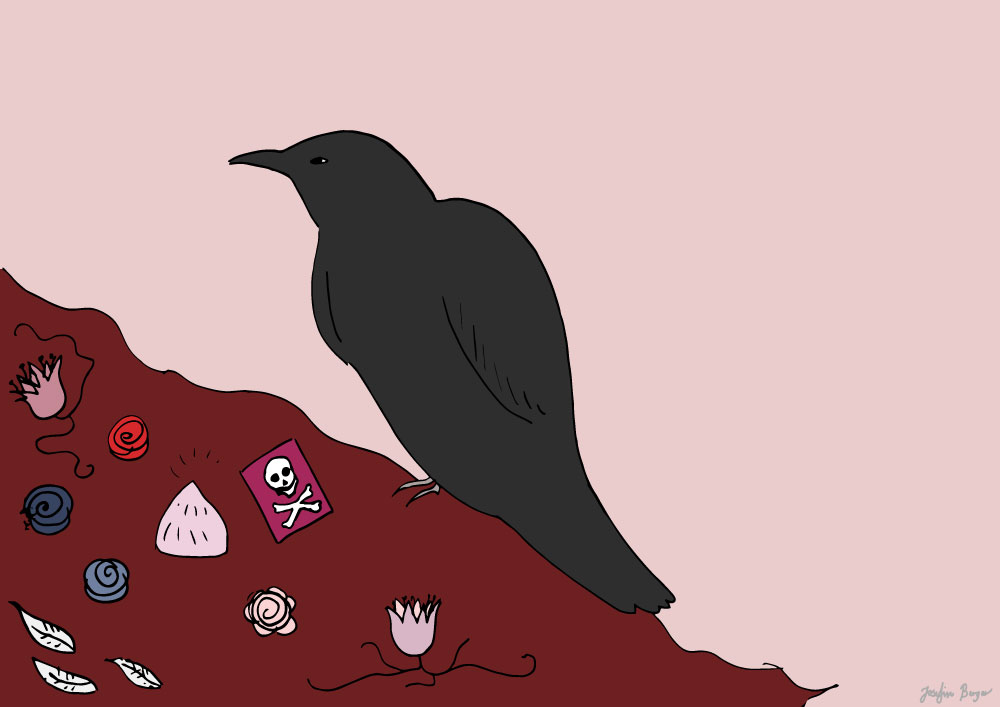 – Aha! When you die, you will stop think about him, said the raven.

– Wait, it could be when he dies! Croaked the raven.

– I have it! It means, that you are a hopeless case! Cried the raven and flew up in the air, now laughing hysterically.

– You’re not really taking this very seriously! I do want to forget him. And the witch is supposed to fix me, so it must mean something else, said Arianwen decidedly (though she couldn’t completely shake of the thought about her being a hopeless case).

In that moment the giggling raven hit the bookshelf, and a couple of books fell down on the wooden floor; “The Lady of the Squares”, “Sally Patter” and “A gamble of chairs”. Arianwen’s bookshelf was crowded with fantasy stories and magic spell recipes.

A fourth book that had fell down opened itself in the middle, and the spread showed an ink illustration in black and white of a cross. Below it, in handwriting, was a spell called Memory Blur. As most magic spell books there was a peculiar scent coming from it when opened. Arianwen looked at the death skull, and then at the ink cross.

– Maybe it means that I will forget him completely. Not even know that he ever existed …

Arianwen made a circle above the magic spell book with her right hand, and mumbled “Abrakadabra simsalabim, don’t lie there and stare, go back to where you where!” which closed the book and made it jump up in the bookshelf. Then she clapped three times with her hands and said: “That’s true, you too!” and the other three books flew up to their places as well.

– Would you really want that, Arianwen? said the tree house that had been listening in while doing her morning leaf yoga in the early sunbeams.

– To forget him. Not know that he ever existed.

– Oh, no, I don’t. Some guys would be nice to forget completely actually. To not know that they ever walked in this forest. But him, no. Well, I guess I still wish that he changed his mind. Or at least that he wanted to be my friend. I just don’t want to miss him.

– Then I don’t believe that you will forget him completely, said the tree house. And he might come around in some way, who knows.

– Thank you. I hope you’re right. Oh, gosh, I guess I am a little nervous about going to the witch after all. Usually the tarot cards help me see things clearly and calm me, but today I’m just too high-strung to understand anything at all from that death skull.

The tree house stretched itself to the left so that all the tea cups in Arianwen’s kitchen rattled, and a pair of silver cutlery fell down on the kitchen floor.

– I’m sure the witch will be able to interpret the death skull for you. Everything will be fine. A new, happy, love life awaits you, said the tree house and stretched all it’s branches and leaves to the right.

– Well, in any case, I have to try it, even if there is risk involved. I need change! And the witch could be the key.

Arianwen took the bags with food and drink that the self-baking oven had made, and placed those on her red carpet. She spread a little bit of glimmering magic powder over it, while circling her right hand and mumbling: “Abrakadabra simsalabim, fly fly high, higher in the sky”. This would make it easier for the two ravens to carry her.

Speaking of the raven, it now came flying down with a friend, and the black birds placed themselves on two sides of the carpet. Arianwen sat down in the middle, with the provisions and her pink bag with some necessities as some clothes, crystals and a book with her favorite magic spells.

– Good bye. Good luck and may the witch help make all your love dreams come true!

– Thank you! You are the best – I love you so much, said Arianwen. And may all your dreams come true too. Yes, and that I wish for all of you. She looked from the self baking oven and up into the tree house crown, and also at the two ravens.

– Thanks dear, but I already have everything I need, said the oven.

– We want it all, we want more! croaked the two ravens in choir, and everyone laughed.

The black birds started to flap their wings, and the carpet with Arianwen rose. Arianwen looked down and waved goodbye, as she flew higher and higher. Now The Tree House looked very small down there. At this level Arianwen could hear all the trees of the forest sing together. And her own tree house in the midst of it, that had started to sing a morning hymn while waving goodbye with her branches.

Soon they where very high up in the sky, heading in the direction of The Misty Blue Mountains. 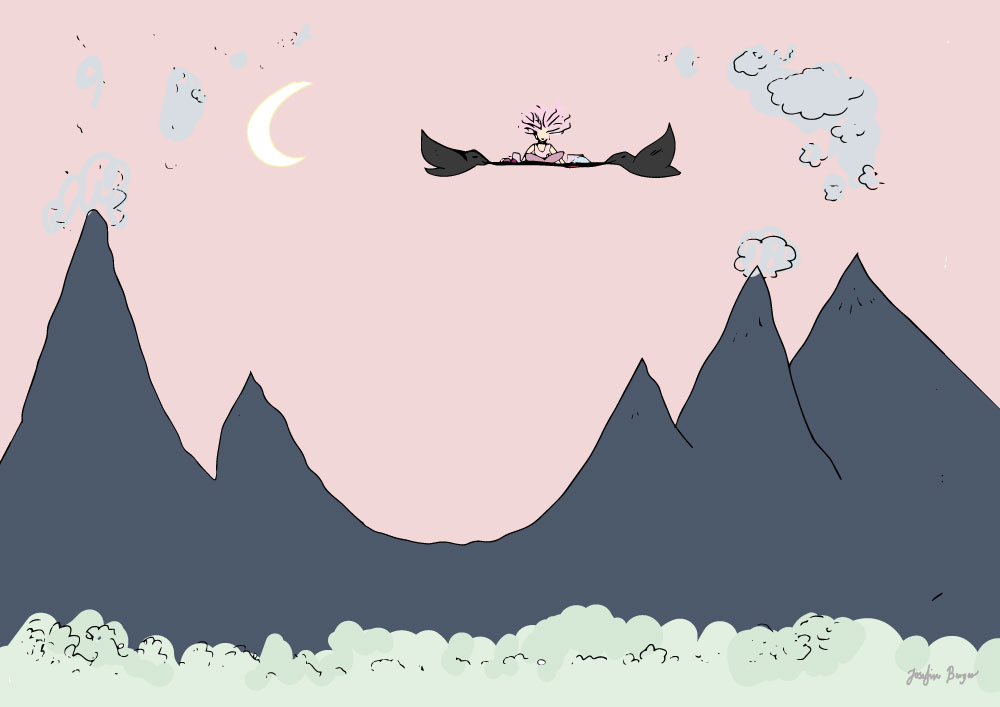 —> What does the death skull really mean? Well, we’ll see! The story will be continued. 🙂 Next episode will come in a 1000 years.

No, alright, not that long time. But almost, actually. It will come at the beginning of July 2021. Why? Well, I have other businesses to attend to at the moment, simple as that.

Below my new singles Vargsången, Go Kiss an Orc (Chapter 2) [Remix], Go Kiss an Orc – Chapter 1, Swedish Love Song & I Wish (Piano & Harmonies Version)! Welcome to have a listen. You find them on Spotify and most other places where you download or stream music.

You can read about the songs at the music section of the site.

✨I hope you are having a beautiful start of the winter season. May The Fairies Be With You! <3